The ground beneath our feet in urban areas inevitably gets more and more congested over time with infrastructure comprising both underground structures and utilities. This, together with increasing urbanization and regeneration, aging infrastructure, climate change and flooding, are fueling a need for utility locating and better understanding of the subsurface conditions.

This is no easy task; utilities can, for example, consist of pipes, conduits, cables, tanks of differing material, size, and age. These utilities are buried at different depths in the ground which can be made up of widely varying natural and imported materials. The knowledge of both the location and depth can be lacking, due to obsolete, inaccurate, or non-existent subsurface maps. This lack of knowledge can lead to excavation or cutting in the wrong places, which in turn can cause serious damage, be dangerous, costly, and result in huge time delays.

So, knowing the locations of underground utilities can:

Projects analysed after the survey 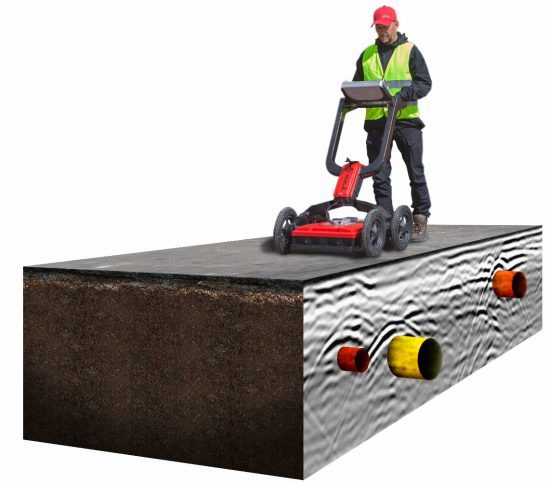 Most often GPR can be used as an efficient investigation technique to investigate utilities, without digging or drilling. 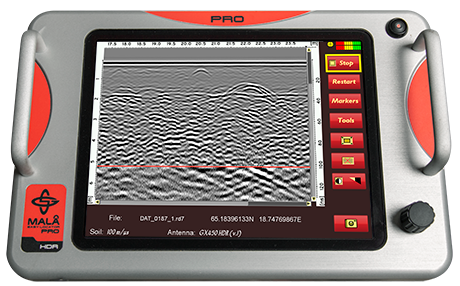 The transmitter and receiver are often put in one antenna box for easier handling in the field but can also be housed in separate units. Discrete objects, such as utilities, typically produce characteristic features, so called hyperbolas, in the resulting radargram.

and the required resolution and depth of your survey. For utility locating and mapping, frequencies of around 160-600MHz are usually suitable; see table below.

As seen in Table 1, the resolution changes with antenna frequency. This is also true for increasing depth, meaning that objects need to be larger, at depth, to be detectable.

*values seen in common soils and geology; significant improvements may be experienced in other media such as clean sands and frozen ground.

GPR measurements are most often done by pushing the antennas in a cart along a predetermined line on the ground. During an investigation, the position of the GPR antenna can additionally be tracked by an external or internal GPS.

A 2D single-channel GPR system can only map a single subsurface profile with each pass. In order to better understand the size, shape and distribution of buried structures and objects it may be beneficial to build a 3D data volume where the GPR data can be used to create informative maps from various depths of the subsurface; there are two approaches to this.

The first is to build up a data block with a single-channel instrument collecting data at relatively coarse spacing (say 0.25m or 0.5m line intervals) in one or, ideally, two directions, orthogonal to each other.

The second approach, which will offer extremely high-resolution information of the subsurface, is to collect a “true 3D” data set, where the multiple parallel lines must be collected with extremely dense transect spacing. The ideal spacing is related to the frequency of the antenna and for a typical utility system this would be less than 0.1m. With a single-channel system, this approach would result in a time-consuming investigation with difficulties in positioning each individual line correctly. Instead, multi-channel solutions have been developed where an “array” of several transmitters and receivers provide the closely spaced data channels and precise positioning required for “true 3D” survey. It should be noted that these multi-channel array systems are distinct from instruments with multiple channels collecting fewer, more widely spaced profiles at once, or just multiple frequencies along the same line. As the true 3D systems create a data volume made up of extremely dense profiles, where line spacing and trace interval are similar, the survey swathes need only be collected in one direction.

Single channel 2D GPR is often sufficient for smaller utility locating and mapping projects, but when the investigation area gets larger, and the layout of the buried utilities gets more complicated, a multichannel solution can be a more efficient option.

When working with single-channel GPR, over good ground conditions, the identification of hyperbolas can often be done directly at the site, marking their position and/or depth on the ground surface. The location of the utility is set at the hyperbola’s highest point and all Guideline Geo single-channel GPR systems have a back-track function to simplify the work of directly marking out the detected utilities.

Projects analysed after the survey – “post-processing” 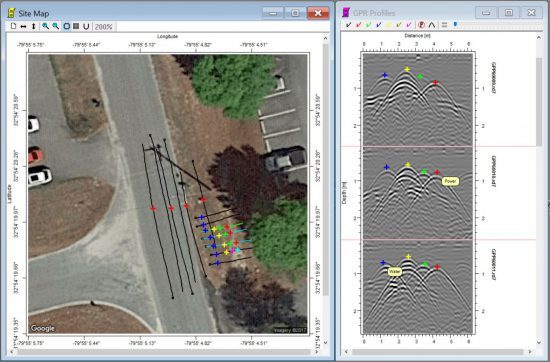 If the ground conditions are tougher, or if the investigation area is more complex, with several utilities at different depths, or if measurements are done with a multichannel unit, post-processing is needed. For 2D measurements, MALÅ Object Mapper is a convenient solution to both display measurement lines and the location of utilities. For 3D measurements, software such as rSlicer or GPR-slice can be used.

The Object Mapper software shows the investigated lines together with the radargrams and the identified utilities.

Example of utilities mapped with Guideline Geo´s multichannel MIRA system. Processing is done in the software rSlicer, which provides a number of different processing steps and export of GeoTIFF images and DXF-files of interpreted features.

Utilities and other underground constructions mapped with the MiniMIRA system.

This case shows a large-scale utility mapping, with the MALÅ MIRA system

Guideline Geo has several solutions for investigation of utilities of different types, size, shape and location.

Guideline Geo´s EasyLocator GPR systems are designated and developed for the Utilities application area. The EasyLocator series contains very easy-to use solutions for a range of needs from direct marking of obstructions to more comprehensive 2 channel (dual frequency) equipment. All systems are rugged and come with an integrated foldable cart for convenient work in the field as well as easy transfer between investigation sites.

If you are going to work on larger areas, with complex utility lines, Guideline Geo´s multichannel arrays MIRA, MIRA HF or MIRA HDR are suitable solutions for utility locating giving you multiple, close-spaced parallel lines (total number varies by MIRA model) in one single swath, perfectly positioned and results can be easily processed for 3D views (e.g. time-slices) in rSlicer and GPR-Slice.

If you also have a need for other types of GPR investigations, for roads, geology, rebars, asphalt etc. the ProEx system is more suitable for utility locating. It is the most versatile of Guideline Geo´s GPR system and compatible with a broad range of antennas, from 30 MHz to 2.3 GHz.

Guideline Geo´s Ground Explorer (GX) system also provides you with a GPR solution for a broader range of applications than utilities. It comprises antennas from 80 to 750 MHz suitable for utilities, geology, roads, ice and snow etc. This is the easiest to use system with its WiFi option, making all cables unnecessary.