An investigation into spurious frequencies

Not so long ago I was looking at the frequency response of some seismic data and noticed a few sharp, distinctive narrow spikes. These reminded me of a University lecture, nothing to do with a geologcial investigation, but rather about the natural resonance of our planet. The phenomena could be conceptualised as being similar to hitting a bell and listening for different tones. The idea being that a bell when struck vibrates with complex motion. 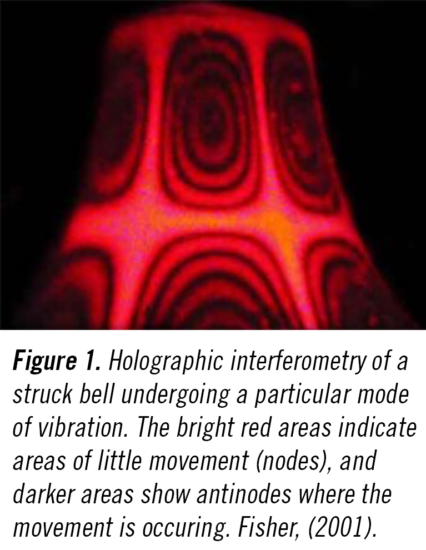 There are regions that stay relatively still called nodes and regions where movement is concentrated called antinodes. Different patterns of nodes and antinodes relate to particular modes of vibration, these are sometimes called overtones and established by the constructive interference of  waves travelling backwards and forwards within a confined space. This means that driving a bell using a particular frequency allows certain modes to be isolated Figure 1, but also for multiple modes to exist depending on the range of frequencies induced by the source.

Already in 1882 vibrational modes for planet Earth were hypothesised by Horace Lamb but not until the 1960 Chile earthquake, the largest earthquake recorded in the 20th century were the normal modes of planet Earth first unambiguously observed in recorded seismic data by Benioff, Figure 2.

At this point when we note that in both cases these phenomena are casued by elastic waves, it is perhaps unsurprising that any object with a clearly defined mass and scale, be it bell, planet or geophone could act as a vessel for higher modes of resonance. 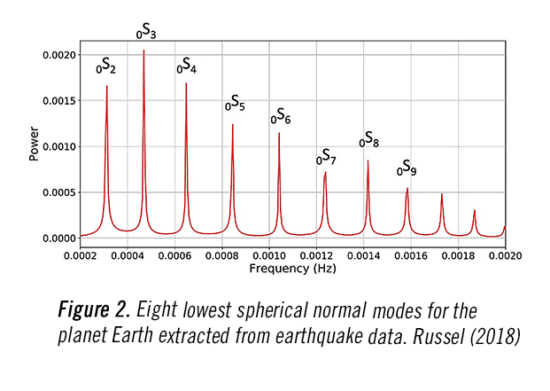 Next is to consider the implications of higher modes occuring within geophones used for my geological investigations, Figure 3. The assumption being that, just like our planet, higher modes may become activated when a geophone is subjected to high amplitude and frequency energy. It has been shown that when higher modes are activated transverse or rotational 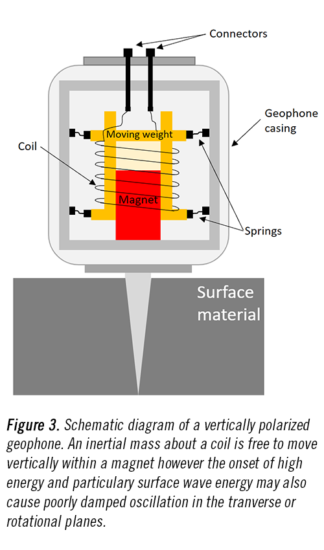 motions of the interial mass within the geophones may occur. Moreover when a geophone begins to oscillate with higher modes of resonance the output in the seismic trace may manifest as an underdamped ringing noise (Faber and Maxwell, 1997). This can have implications on the data and I was curious to see how this ringing noise appeared, so said and done, time for tests. Tests to try to to generate higher modes, record and then analyse the output.

To do a test, we set out a linear array of 24, 14Hz vertically polarised R.T.Clark geophones placed at 0.4m increments to create a 9.2 metre length linear array. A sledgehammer was used at the end of the spread to generate a strong signal with a relatively high amplitude and broad frequency content in relation to the receiver offset, that is to say we hope to activate spurious frequencies in some or all geophones. The test was conducted on concrete. Concrete is relatively firm and should be able to transmit high frequency energy to more distant geophones.

I used my ABEM Terraloc Pro 2 seismograph, without any filters. The sampling rate was set to 1000Hz (1ms). The Nyquist frequency is 500Hz allowing signals up to this frequency to be accurately recorded. This sampling value was chosen by first looking at the manufacturers transfer function graph, Figure 4. The transfer function is useful as it shows the usable bandwidth of any geophone, with the upper bound being close to the spurious response shown here at 220Hz.

Figure 5 shows the result with distance along the ground surface on the X axis with time starting from the moment the source was triggered along the Y axis. In these results it is possible to see the primary wave onset generated from the source at progressively later times as the wave travels from the geophones closest to the source point to the most distant. To test for the presence of spurious frequencies the data were analysed in the frequency domain. This is done by a Fourier analysis, converting the signal in time to that of frequency. 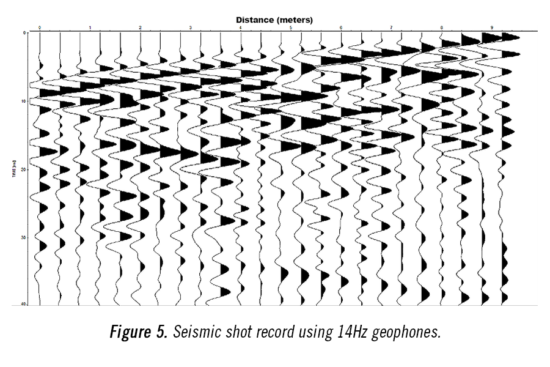 Clearly enough of a spike is observable at 220Hz Figure 6.  In addition, a number of higher frequency peaks are visible which may indicate further tortional/transverse modes. A 220Hz undamped signal was generated and overlaid onto the first trace from the unfiltered field data. It confirms not only is the 220Hz signal present but that it is resonating in an underdamped way. Figure 7. 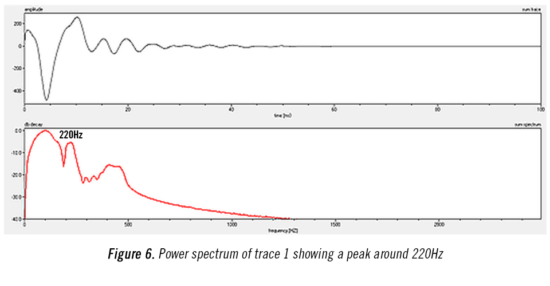 Finally, by applying a 180Hz high cut filter with a 20Hz taper the higher mode data were removed from the shot record, Figure 8. Power spectrums for both unfiltered and filtered traces show that filtering reduces the average decibel level from 3.74 to 1.94. That is to say 49% of the recorded energy is attributable to potentially higher mode energy and signals that are outside of the usable bandwidth outlined from Figure 4. 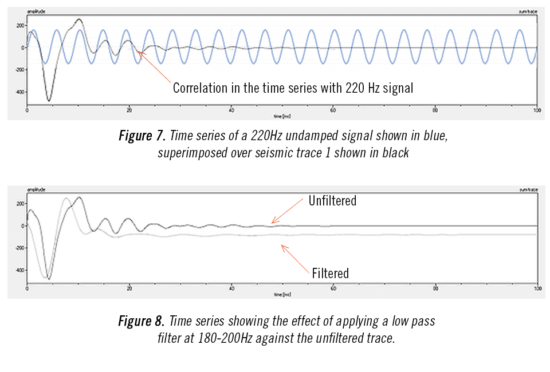 The test shows that it was possible to create underdamped ringing in most geophones along the spread at 220Hz, as far as 9 metres from the source. The 220Hz signal is attributed to higher modes of resonance induced within the geophone.  Through adequate sampling and filtering it is possible to reduce much of the effects from this signal within the data. However, if the sampling rate were insufficiently high to faithfully record higher frequency signals, then those signals will be aliased into the shot record as lower frequency signals and then become a source of potentially undetectable noise. This could have implications, for example when undertaking Surface Wave analysis methods, or mask other signal onsets when viewing data in the time domain.

Spurious effects can be mitigated by adequate acquisition setup and field testing. One place to begin is to check the transfer functions of the geophones being used and assess the useable bandwidth. In the case of the 14Hz geophones used in this test, the acceptable bandwidth is in the region of 10-200Hz, Figure 4. If working on hard ground or having broadband sources in close proximity to geophones, then a workflow implementing suitable sampling interval and filters will be helpful to mitigate potential spurious effects.

The ABEM Terraloc Pro 2 seismograph allows the user to observe the frequency response of geophones during data collection. This will allow the user to assess potentially spurious signals, potential aliasing hazards and adjust sampling accordingly when on site.

I would like to finish by recognising professor Jon Mound, for those lectures interesting enough to still remember R.T.Clark and Faber and Maxwell´s paper entitled ‘Geophone spurious frequency: What is it and how does it affect seismic data’. The paper provides a platform to perform these tests and is highly recommend for a more detailed view into how manufacturers perform spurious frequency analysis. 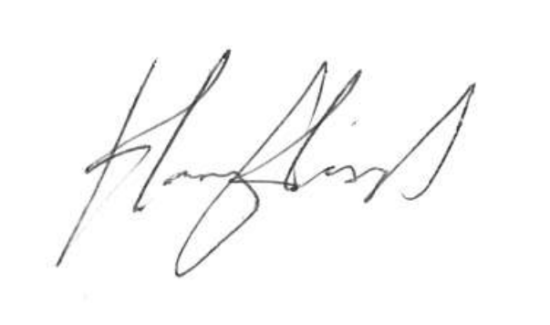