What antenna frequency should I use for my GPR investigation?

Which antenna frequency to use depends mainly on two factors: the desired resolution and depth of your investigations. Quite often the choice will be a trade-off between these two factors.

Before getting into how to select an appropriate antenna to use, we need to talk about the antenna frequency. The practice among GPR manufacturers is to name the antenna based on the center frequency used. It is important to understand that even if two antennas are using the same center frequency, they may perform completely different in a certain location. The reason is often that the antennas have different signal bandwidth.

670MHz: Details are clearly seen near the surface but not all objects situated deeper down are detected. 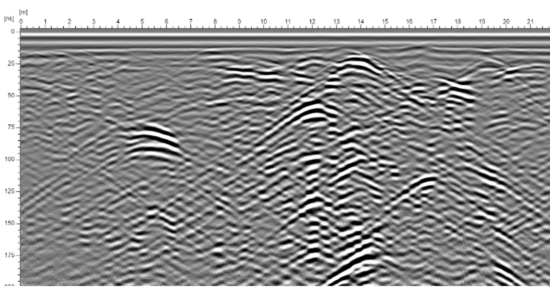 160MHz: Several features can be seen deeper down, but the small ones, near the surface, appears to be one.

As a consequence, you almost always need to compromise on the choice of antenna frequency for a particular application at a specific site. A good rule of thumb is to choose the lowest antenna frequency to resolve your target. The depth penetration varies with frequency, but also varies depending upon the local soil conditions. A more conductive ground will, for example, attenuate the GPR waves (which limits the depth penetration). It should also be noted that the antenna technique used to actually build the antennas also affects both the depth and the resolution. For instance, the HDR (High Dynamic Range) technique produces antennas with both better depth penetration and higher resolution.

The table should therefore be seen as a good estimate, in an average soil with a GPR wave velocity of 100 m/µs. Often the performance will be better.

*The values for the approximate depth are calculated by the assumption that in ideal conditions, the maximum depth of penetration before the full energy of the transmission is lost is 20 wavelengths or less. Please note that any obstacles (i.e. rebars or objects in the investigated material will potentially reduce the potential depth penetration of an antenna). The potential maximum depth of antenna also depends on maximum time window of that specific instrument (see text below).

The GPR systems also has a maximum time window which will be important to consider before starting any measurement. The time window is defined as the time the receiver antenna (Rx) listens to echoes from a transmitted electromagnetic wave, and if this is not long enough you may stop listening before the signal has reached the target you are looking for. Most often it will, however, be the local ground conditions (first and foremost the conductivity) that will limit the penetration of the GPR wave.

In extremely clean medias, such as snow and ice, the GPR wave will travel almost unhindered, but in soils and concrete it will be scattered when reflecting off, for example, grains or stones or be attenuated due to conductivity.

If it is hard to decide which antenna frequency to choose, this can be solved by using either a dual frequency antenna or a multichannel control unit combining both higher and lower antenna frequencies. This gives the possibility to map details near the surface but also to detect larger feature deeper down in the ground, at the same time. You can, of course, also survey the same area twice with different antennas, to get even more information about buried features in the subsurface.