What is the dielectric constant and why it matters to GPR?

The dielectric constant (also called relative dielectric permittivity, RDP) is a measure of the ability for a material to store a charge from an electromagnetic field and then transmit that energy. The RDP varies greatly for different geological material and affects the velocity of the GPR signal (and hence the measured depth) and also the GPR signal footprint.

The dielectric constant takes both the magnetic and electrical properties of the medium into account. And this is important as it is directly related to the velocity of the electromagnetic GPR waves through the ground.

Where 𝒗𝒎 is the velocity of the medium, 𝒄 the speed of light and 𝜺𝒓 the relative dielectric permittivity (the dielectric constant).

The dielectric constant of a given material can vary greatly, and the addition of just a small amount of water can often drastically change the RDP value of a specific material. Dry sand with an RDP value of between 3-4 can if wet have RDP values around 20-30.

The dielectric constant, together with antenna frequency and measurement depth, also controls the signal footprint of the GPR antenna. A GPR does not only measure what is directly below the GPR antenna but also what is in front, behind and to a less extent to the sides of the antenna. The size of the footprint at different depths will define the size of the objects that you can image. The signal footprint is smaller closer to the surface and will spread out as it travels deeper. 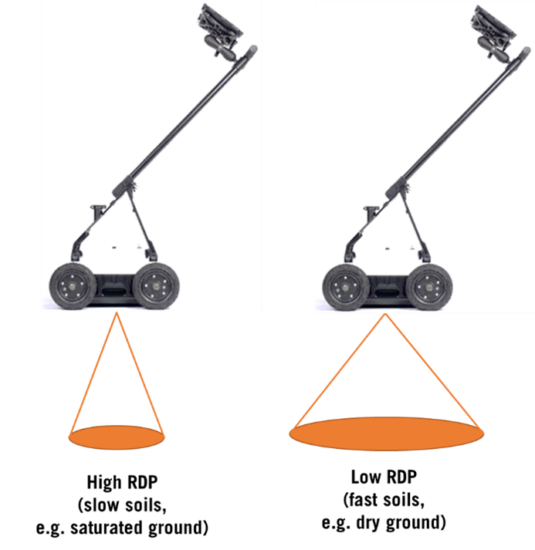 Note If the signal travels between two materials with different RDP values the size of the cone of transmission can become more or less focused. For example, if the RDP (relative dielectric permittivity) of the encountered medium increases, the beam of transmission will be focused and if the RDP decreases the beam spreads out. On a survey site with multiple layers of differing RDP values the transmission beam will change shape with depth.