What is the footprint of a GPR?

The footprint of a GPR describes the radiation pattern form, emitted by a GPR antenna. The size and shape of the footprint is, apart from the antenna design itself, dependent on the dielectric constant at your survey site together with the antenna frequency and the measurement depth of your target (see image).

In most commonly used configurations, the GPR transmitter and receiver are oriented parallel to each other and perpendicular to the survey line. Due to the electromagnetic radiation pattern a GPR does not only measure what is directly below the GPR antenna but also what is in front, behind and to a lesser extent to the sides of the antenna. In order for an object to be detected, sufficient energy needs to travel from the transmitter to the target and back to the receiver, and the target object needs to be illuminated by the radar footprint (hence the orientation described above).

The size of the footprint at different depths will define the size of the objects that you can detect. The footprint will be smaller closer to the surface and will spread out and increase in size as it travels deeper into the ground. In essence this means that you will be able to detect smaller objects closer to the surface whereas only larger objects can be resolved at greater depths.

A common analogy is that of a flashlight. If you illuminate a wall with a flashlight the size of the illuminated area will be smaller if you move closer to the wall and larger the further away from the wall you are moving.

You can easily calculate the size of the antenna footprint if you know the wavelength of your antenna (wavelength = soil velocity/antenna frequency) and the relative permittivity of the ground. As seen, the radiation pattern becomes more focused with an increasing dielectric constant (i.e., more water content / more conductive), which results in a smaller footprint and an improved spatial resolution.

The antenna footprint is also referred to as the Fresnel zone.

Note! As indicated above, the footprint will change depending on the antenna orientation (polarization) and with the distance between the transmitter and receiver. Parallel configurations have a larger overlap and inline configurations have a smaller footprint, especially when looking at shallow depths. Also, separating the transmitter and receiver will make the footprint smaller. 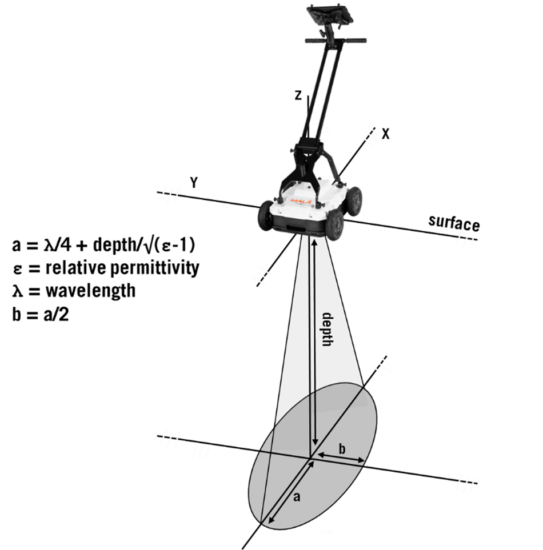