GPR Imaging of the Western Wall

GPR Imaging of the wester wall

GPR was successfully used to investigate the structure and size of ashlars (building rocks) on parts of the Western Wall, in Jerusalem during an investigations campaign by Geo–Sense in 2020 and 2021.

The Temple Mount compound, planned by King Herod in the late first century BCE was built through the mid-first century CE and is still a monumental building in modern Israel, with significant parts preserved. The Western Wall is one of these parts, stretched almost 490 meters and with a height of 19 meters, also about 10 meters covered below the current surface.

The Temple Mount and its building technique, with huge ashlars (building rocks) has been of major interest throughout the years. The investigations need to be non-destructive and still precise to get information from the inner structure of the walls. The previous investigations have most often covered only several sporadic ashlars, but with GPR the plan was to cover a larger area and by that reveal King Herod building technique.

The GPR investigation, with the MALÅ GX system, could reveal the inner structure of the Western Wall and give information on thicknesses of single ashlars in the wall construction.  The results from the investigations concluded that: 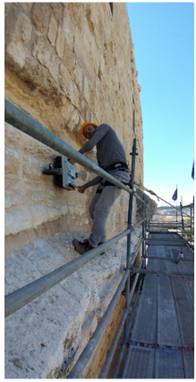 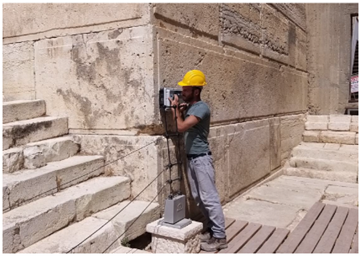 Measurements carried out with the MALÅ GX450 system on different parts of the Western Wall, Jerusalem, Israel by GeoSence

More to read on the internal structure of landfills can be found here:

Geo-Sense Ltd. (www.geo-sense.com) was founded in 1992 by Dr Uri Basson, and the first company in Israel using GPR. Today Geo-sense provides services to the large public, not only for GPR but other geophysical methods as well. The methods used comprise GPR, FDEM, shallow seismic reflection, EM methods, Resistivity, Remote Sensing and Magnetics and covers applications as geology, constructions, environment, water, natural hazards and archaeology. Geo–Sense is a small Israeli company operates in Israel and worldwide.

As the resolution was of high importance, to define the structure of ashlars in a correct way, the MALÅ GX system was used. The GX system is based on HDR technology giving excellent bandwidth, resulting in both high resolution and good depth penetration. From start the size of the stones were unknown so both a 750 and 450 MHz antenna was tried out. To get the correct velocity in these ancient stone, measurements were first carried out on ashlars laying on the ground outside the Western wall. The resulting radargram was matched to the measured thickness and by that giving a correct velocity range for the imaging of hidden sides of the ashlars of the Western Wall. After this the investigations on the wall itself were carried out. 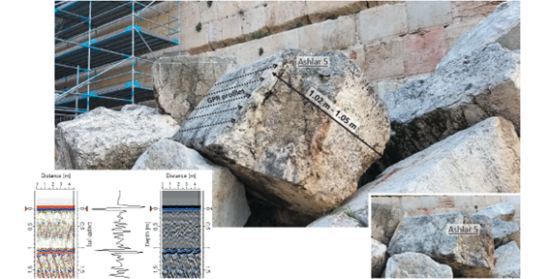 Measurements were made on ashlars on the ground, where the actual thickness were matched to the radargram to get a correct velocity.

It showed the thickness of the investigated ashlars were varying from 0.7 meters up to 3.35 meters depending on the location of the raw. Therefore, the 450MHz antenna was used for the measurements on the wall in places where the penetration of the 750 MHz was not sufficient enough. Measurements were carried out as both in part of the lines using both frequencies.

The processing of data was made by Geo-Sense own developed post-processing algorithms for GPR data.

We would like to thank Geo-sense (www.geo-sense.com) and Dr Uri Basson for sharing this case. .